With the crisis shaking Ukraine and tensions with Russia, sporting competitions found themselves affected and completely disrupted.

How far from the Euro 2012 final, when the Donbass Arena hosted the final between Spain and Italy (4-0). After the paddock was bombed during the Donbas war in August 2014, Shakhtar Donetsk had to relocate to Lviv for two years before finding shelter at the Olympic Stadium in Kiev. The Ukrainian crisis, which has lasted for weeks and has intensified in recent days, has made sports even more uneasy.

Miners are not the only ones forced into exile. Other clubs are affected, such as FK Zorya Lugansk (now in Zoporiya, about 400 km from their stadium) and FC Olympik Donetsk (now in Chernigov, 800 km from their usual place).

A Ukrainian team still in contention in Europe

This season, there is only one club left in Europe: Dynamo Kyiv U19, who will face Sporting Lisbon on March 2.

Note that two Ukrainian clubs based in Crimea have left the local tournament and want to join Russian clubs: FC Sebastopol and Tavriya Simferopol. So far, no agreement has been reached with UEFA.

A few days ago, a question was asked about the Champions League final scheduled for Saturday, May 28 in St. Petersburg. European institutions would consider relocating it. British Prime Minister Boris Johnson also said on Tuesday that “in Russia, which is invading a sovereign state, it is impossible to hold a match”. 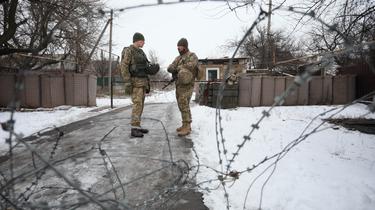 Mind you, the Ukrainian candidate must face Scotland in the 2022 World Cup play-offs next March. No information is provided at this time.

Back in Ukraine, football isn’t the only sport affected. So is handball. Recently, Paris Saint-Germain’s Champions League match against Zaporozhye Automobili, who did not want to move, was cancelled. Basketball is also affected. The Ukraine-Spain match scheduled for February 27 in Kiev should be postponed to a later date.

As such, local competitions are not suspended for now, but if the situation does not improve, meetings of European and international competitions may be increasingly affected in the coming weeks.